You probably think of a closet as a little room where you hang up your clothes. But for much of its history, the closet has served a completely different purpose entirely. 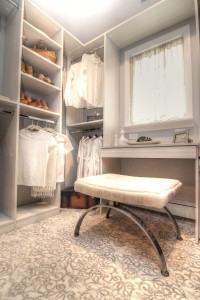 Come back with me, if you will, to the Middle Ages. In the Middle Ages having a bedroom was a bit of a privilege — most common folks slept either on the floor of the great hall of the manor where they lived, or in the single room that served them as kitchen, living room, dining room, and bedroom all in one. Only very wealthy people had bedrooms, and they used their bedrooms not just for sleeping but also for working and entertaining important guests. The bedroom, at this time, was not a very private place. So where could you go if you wanted a little time alone?

At the end of the Medieval period, well-to-do homeowners began adding ‘closets’ adjoining their bedrooms. The closet was a place to store treasured possessions, but it was also a place for prayer, reading, and quiet contemplation. It was by far the most private place in the house, and to this day the word “closet” can carry a meaning of secrecy and privacy. If two people retreat to a secluded spot to have a conversation, they can be said to be closeted together. A “closet racist” is someone who hides their views from the world. (This particular meaning of the word closet may have contributed to the phrase ‘come out of the closet’, although according to Mentalfloss this particular metaphor was not used by the gay community until the 1960s.) 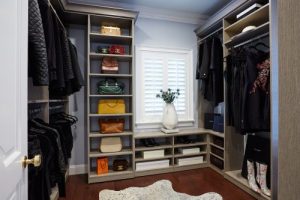 In Europe the closet eventually disappeared, as houses grew larger and other rooms afforded opportunities for privacy. But the Puritans took the idea of a closet with them to the New World — although it had become by then simply a place to store things. Of course, closets are not nearly as prevalent in older houses. There might not even be one in every bedroom, because people then had a lot less clothing, and they were a lot more likely to store their clothes in a chest or armoire than hang them up in a closet. (The coat hanger, in fact, wasn’t even invented until 1869.)

Today the closet is enjoying a bit of a zenith, owing to the fact that many modern Americans own (what would have been considered by the Puritans at least) simply enormous amounts of clothes. The mania for luxury closets has even led to closets outfitted with sofas, vanities, or desks, making them a sort of retiring room/boudoir in addition to a storage space. Which means that these closets have, in fact, come completely full circle.

This post was inspired by and owes much to Lucy Worley’s fascinating book about the history of the home, If Walls Could Talk. It will make you, I guarantee, a completely fascinating dinner party conversationalist, able to wax eloquent about thing like how often medieval people bathed (spoiler: they didn’t) and historical attitudes towards beards.

As a Senior Writer at Apartment Therapy, Nancy splits her time among looking at beautiful pictures, writing about design, and photographing stylish apartments in and around NYC.

At Symmetry Closets we have a passion for creating the best possible space for your needs and personal style. Let us help you organize your home and bring luxury to your spaces.